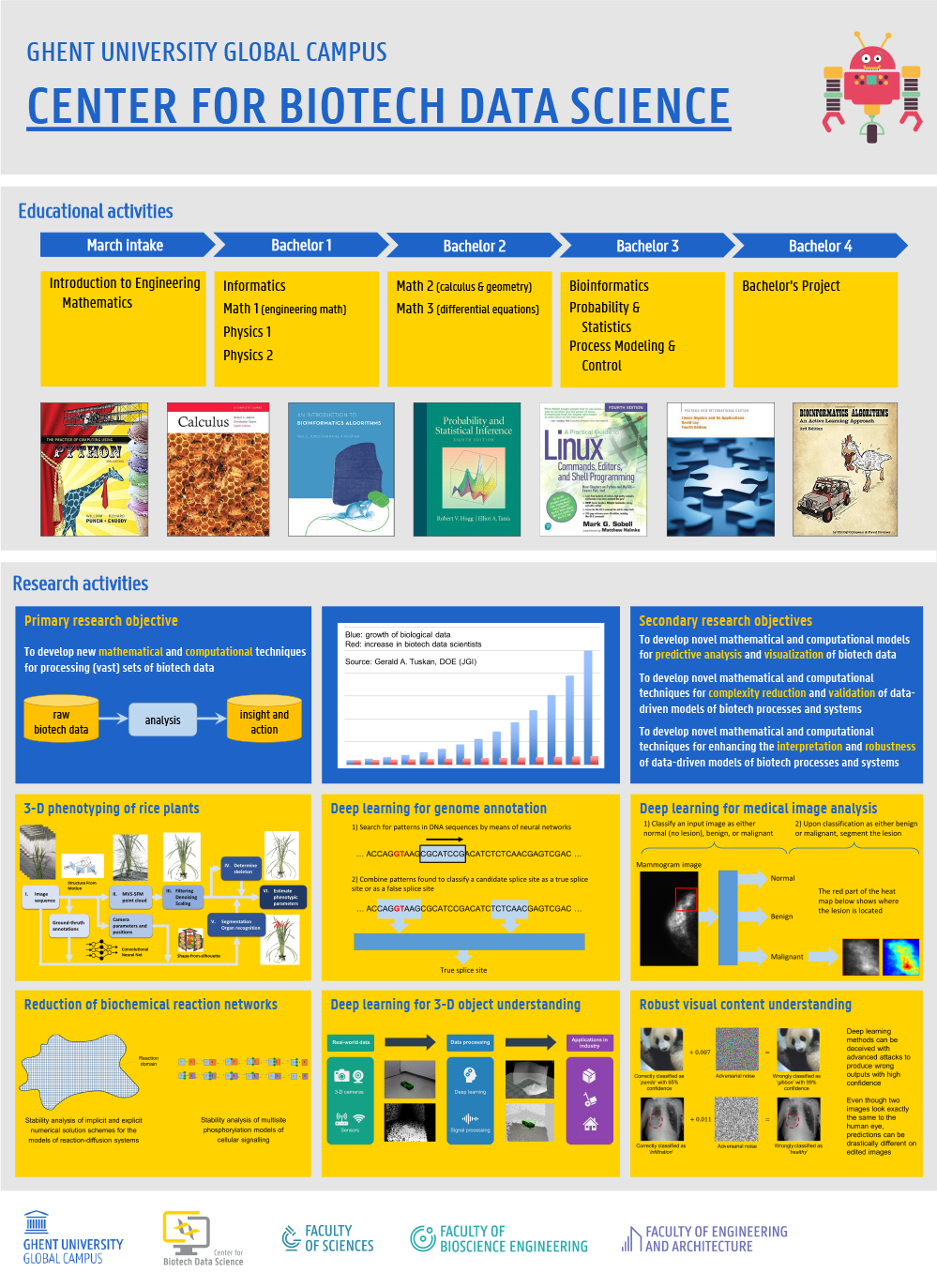 The Centre for Biosystems and Biotech Data Science pursues the development of new mathematical and computational approaches for analyzing biosystems and for extracting knowledge from huge sets of biotech data (e.g., biological sequence data and biomedical imagery), paying attention to technical challenges such as
The newly developed approaches have a wide variety of applications, ranging from cancer research and medical image diagnosis over drug development to plant phenotyping.

Mathematics is often described as the "queen of science" because it has played an active role in the development of science and it has also benefited from its involvement in science. Particularly in bioscience engineering, there are many topics that cannot be mastered without a solid background in mathematics. Some of these topics are stability analysis and control of bioprocess plants, synthetic biology, computational and systems biology, modeling of bio-systems and chemical networks. Consequently, in our BSc programmes of Environmental Technology, Food Technology and Molecular Biotechnology, the mathematical education is quite rigorous and is on par with mathematical courses for other engineering programs like electrical, civil and aerospace engineering around the world. The program involves 3 compulsory mathematics courses and the student is expected to have had a good secondary/high school training in mathematics in order to cope up with the level of mathematics at Ghent University Global Campus. The three courses of Mathematics are

This is a yearlong course split into two semesters. In the first semester, basic high school topics are treated in depth in order to prepare the student for university level mathematics. The topics dealt with in the first semester are trigonometry, 2-dimensional co-ordinate geometry including straight lines and circles, basic algebra, 1-variable differential and integral calculus. In the second semester, some special topics in 1-variable calculus including applications of differentiation and integration in geometry and physics are dealt with along with an introduction to linear algebra including systems of linear equations, matrices, determinants, eigenvalues and eigenvectors. The focus of the course is mainly on the development of scientific skills such as analytical reasoning, critical reflection and problem-solving capability.

This course continues further from Mathematics 1 dealing mainly with 2-D and 3-D coordinate geometry including vectors and multivariable calculus as the name suggests. While some emphasis is placed on understanding theoretical concepts, the students are also encouraged to face and solve real-life application-based problems. The course also lays the foundation for the mathematics that the students will encounter in other third year process-based courses including Process Modelling & Control and Process Engineering.


Next to the pure mathematical courses, the Center for Biotech Data Science is also responsible for providing a strong background in applied mathematics, informatics, statistics, and physics through the courses:

Physics is the study of an enormous span of natural phenomena ranging from the large-scale galaxies to the sub-microscopic entities in their static or dynamic states. Physicists pursue a fundamental understanding of the physical universe whereas engineers apply scientific knowledge to design and develop structures, machines and products. At Ghent University Global Campus, the Physics 1 and 2 course is designed to stitch together the skills of physicist and engineer to enable a deeper understanding of the engineering fundamentals through a broader understanding of physics in an engineering context. This course is an intensive course of study that emphasizes analytical and problem-solving skills. Physics 1 and 2 is a yearlong course aimed at providing the students a thorough training in basic physics, with a focus on both basic principles and practical applications. It further aims to make the students familiar with the practical applications of mechanics in everyday life, to establish an understanding of the various states of matter, to gain a working understanding of both physical and chemical thermodynamics, to learn with respect to physical aspects how to calculate the energy transfer of processes. The syllabus for the course has been carefully crafted to cater to the needs of students majoring in molecular biotechnology, food technology and environment technology.

Scientists and engineers are often confronted with time-consuming and repetitive tasks when having to process and analyze data, namely collecting information from websites, converting files from one format to another, and analyzing, summarizing and visualizing the information obtained. In addition, the exponential flow of newly incoming information requires present-day scientists and engineers to be able to automate these tasks, in order to speed up their daily job routines.
This course teaches students how to describe time-consuming and repetitive tasks in such a way that they can be performed automatically by a (network-based) computer system. To that end, the necessary skills for computer-based creative problem solving will be acquired through learning to work and think in (1) Python, a popular programming language, and (2) in UNIX, the workhorse operating system of science and engineering. The computer problems that need to be solved are taken from different scientific disciplines, including mathematics, biology, chemistry, physics, and computer science.

The first part of the course deals with modelling of biosystems encountered in environmental engineering, food technology, ecology, chemical engineering, biotechnology and process industry. Students are taught how to use Matlab Simulink toolbox in order to model and simulate biosystems. Since no standard techniques are available for the analysis of nonlinear systems which are commonly encountered in practice, the course also includes techniques for linearization of nonlinear systems. The second part of the course deals with analysis of impulse, step and frequency response of first order and second order linear systems. The third and the final part of the course deals with techniques for design of feedback control that ensures bounded-input bounded-output (BIBO) stability of the controlled system. This part also deals with control of dead-time systems which are commonly encountered in real life applications.

Statistics is the science that collects, analyses, and interprets numerical data, with as goal to summarize the data (descriptive statistics) or draw conclusions from them (statistical inference). Nowadays, every scientific field is confronted with large amounts of data, and thus plays an ever-increasing role in, e.g., drug development, climate research, or food quality control.
In this course, students are first introduced to probabilistic and statistical concepts. They learn to perform statistical techniques and to correctly describe and interpret statistical data and output. They also learn to distinguish between haphazard effects on the one hand and scientifically significant results on the other hand. Focus is also placed on critically reading and evaluating results presented in scientific literature.
The second part of the course continues where process modelling left off, namely with the simulation of dynamical (bio)systems. Different methodologies are discussed for model simulation, parameter estimation, and sensitivity analysis in order to come to a final model selection.
All theory is illustrated with ample examples. The statistical software R is used throughout the course.